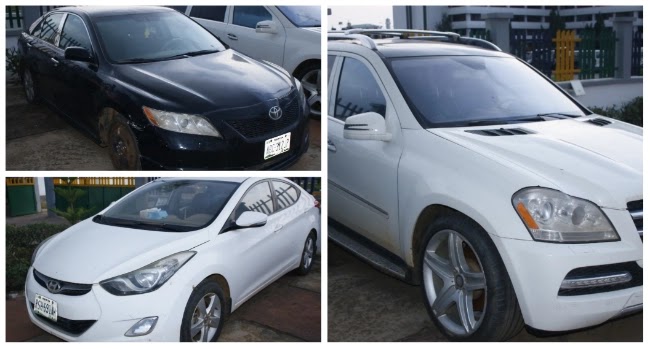 The police on Friday said it has recovered three stolen vehicles from Niger Republic.

The vehicles, which were stolen from Nigeria, were recovered through the help of International Criminal Police (INTERPOL) operatives in Niamey, a statement signed by police spokesperson, Olumuyiwa Adejobi, said.
“The investigation which lasted for several days led to the recovery of a Toyota Camry with Chassis No: 4T1BE46K47U673141, Mercedes Benz 2012 550GL with Chassis No. 4JGBF8GE8CA762560 and a Hyundai vehicle with Chassis No: KMHDH41EBDU54686,” the statement said.
According to the statement, the Inspector-General of Police, Usman Alkali Baba, commended the “unrelenting efforts” of police operatives and the INTERPOL Niamey for their cooperation.
“The Inspector-General of Police enjoined Nigerians to take advantage of the cooperation to recover their stolen items, particularly vehicles,” the statement said.
The IGP also “urged the owners of the aforementioned vehicles to approach the Nigeria Police Force Criminal Investigations Department, INTERPOL Section, at the Force Headquarters, Abuja, for the recovery and claims of their vehicles, with valid proofs of ownership and proper means of identification.”
Share 0 FacebookTwitterPinterestLinkedinRedditWhatsappTelegram
previous post