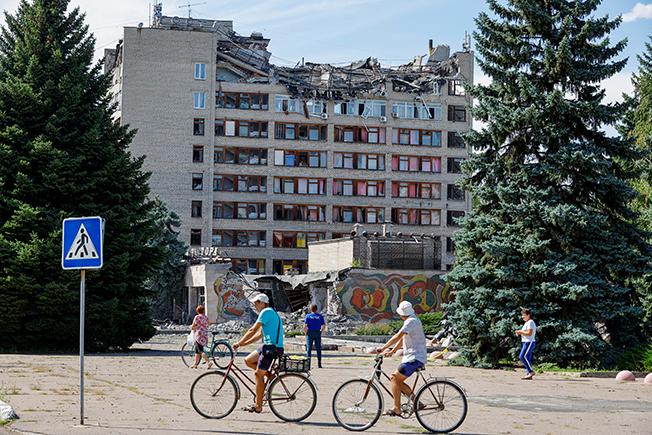 Russia unleashed ground forces, air strikes and artillery as it pressed ahead with a grinding offensive designed to complete its capture of eastern Ukraine, but Kyiv said its troops were putting up fierce resistance and holding the line.

Heavy fighting was reported on Tuesday in frontline towns near the eastern city of Donetsk, where Ukrainian officials said Russian troops were launching waves of attacks as they tried to seize control of the industrialised Donbas region.

“The situation in the region is tense – shelling is constant throughout the front line … The enemy is also using air strikes a great deal,” Pavlo Kyrylenko, governor of the Donetsk region, one of two that makes up Donbas, told Ukrainian television.

“The enemy is having no success. Donetsk region is holding.”

The Ukrainian military said it had repelled ground assaults in the direction of the cities of Bakhmut and Avdiivka and had wiped out Russian reconnaissance units, including near Bakhmut.

Russia gave a different assessment. Chechen leader Ramzan Kadyrov claimed his forces had captured a factory for Moscow on the edge of the eastern town of Soledar, other Russian-backed forces said they were in the process of “clearing out” the heavily fortified village of Pisky, and Russian media reported that a group of mercenaries from the Wagner Group had dug in near the city of Bakhmut.

Some of the places Russia is targeting like Pisky are heavily fortified settlements crisscrossed with tunnels and trenches where Ukrainian forces have long been dug in.

Reuters could not verify either side’s battlefield accounts.

British military intelligence, which is helping Ukraine, said that Russia’s push towards the city of Bakhmut had been its most successful operation in the Donbas in the last 30 days, but said it had still only managed to advance around 10 km (6 miles). It said Russian forces in other areas had not gained more than 3 km over the same period.

Russia, as part of what it calls its “special military operation”, has said it plans to seize full control of the Donbas on behalf of pro-Kremlin separatist forces, while Russian-installed officials in parts of southern Ukraine have said they plan to press ahead with referendums to join Russia.

Ukraine, which say Russia is prosecuting an unprovoked imperial-style war of aggression, is banking on sophisticated Western-supplied rocket and artillery systems to degrade Russian supply lines and logistics.

Kyiv, which has made modest progress in recent weeks taking back some settlements in places, is also getting Western help when it comes to intelligence, training and logistics, and hopes it can launch a wider counter-offensive in southern Ukraine to dislodge Moscow’s forces.

Apparently spooked by that risk, Russia has moved to bolster its forces in the south and, according to Britain, focused on reinforcing its defences there over the weekend.

Neither side reveals the number of dead or wounded, but both are believed to have suffered heavy losses.

U.S. Under Secretary of Defense for Policy Colin Kahl on Monday said Russia had suffered between 70,000 and 80,000 casualties, either killed or wounded, since President Vladimir Putin sent tens of thousands of troops into Ukraine on Feb. 24.

Stepping up its fiscal aid and military spending on Ukraine, Washington announced it would send $4.5 billion in budgetary support and $1 billion in weapons, including long-range rocket munitions and armoured medical transport vehicles.

Ukrainian President Volodymr Zelenskiy said in an interview with the Washington Post that he wanted the West to impose a blanket ban on all Russians, including those that had fled Russia since Feb. 24, and for them to “live in their own world until they change their philosophy”.

“Whichever kind of Russian … make them go to Russia,” Zelenskiy was quoted as saying.

“They’ll understand then,” he said. “They’ll say, ‘This (war) has nothing to do with us. The whole population can’t be held responsible, can it?’ It can.”

The Kremlin dismissed Zelenskiy’s call for a ban as irrational, saying that Europe would ultimately have to decide if it wanted to pay the bills for his “whims”.

“Any attempt to isolate Russia or Russians is a process that has no prospects,” said Kremlin spokesperson Dmitry Peskov.

Tensions remained high around the Zaporizhzhia nuclear power plant, the largest of its kind in Europe, after both sides accused each other at the weekend of endangering it with reckless military action.

The plant, which is staffed by Ukrainians, has been under the control of Russia since March. Moscow has militarised it to prevent Ukrainian forces from retaking it.

Russia’s RIA news agency cited a Russian-backed separatist official on Tuesday as saying anti-aircraft defences around the plant would be strengthened.

United Nations chief Antonio Guterres on Monday called any attack on a nuclear plant “suicidal” and demanded U.N. nuclear inspectors be given access.

US believes Ukrainians behind killing of Dugina in Russia